1st of November 1916
In the yearbook of the R.S.C. of  1917 is written that the forerunner of R.S.R. Marcroix is established on the 1st of November 1916. It was called: het Rotterdamsche Studenten Rijgezelschap 'De Jockey Club'. Unfortunately they didn't last for a long time.

October 1920
In 1920, around the 14th of October another forerunner of R.S.R. Marcroix is trying to establish an association. They were called: de Rotterdamsche Studenten Carousselvereeniging. This association also didn't survive.

14th of October 1925
A few enthusiastic riders of the R.S.C. established the Rotterdamsche Studenten Rijvereniging (R.S.R.). R.S.R. is hereby the oldest association of the R.S.C. This time a riding club would last for many many years!

November 1929
The R.S.R. used to be for men only. In November 1929 they decided to have a mixed club evening, together with the female riding club.

1930
R.S.R. also suffered from the crisis. The board of the R.S.R. asked the members to get the whole association out of debts by the following words: "members, we won't need your words, but we do need your action!"

1932
Lieutenant-General of the Huzaren, Charles Ferdinand Pahud de Mortanges, made furore during the Olympics in Los Angeles with his horse Marcroix. In the heaviest military he won a golden medal. Because of its great succes, R.S.R. gave itself an extra name: Marcroix. The association is called R.S.R. Marcroix from now on.

8th of December 1954
The president of R.S.R. Marcroix announced during the annual meeting that the rocking horse got lost during an evening at the R.S.C.

1960
The Militair Ruitersport Centrum, settled in Amersfoort, also uses the name Marcroix for their association.

6th of November 1963
The board of R.S.R. Marcroix announces during the annual meeting that the mascot, a statue of a horse, has got stolen. The board of the R.S.C. did not help at all to get the statue back, which was disappointing for the board. Besides, the 'Haverzak', got stolen by wild pigs during a ride. The 'Haverzak' has never found.

26th of October 1964
A benefactor gives R.S.R. Marcroix a chandelier, made of the shoes of the horse Marcroix.

14th of November 1968
A member of R.S.R. Marcroix announces during the annual meeting that riding is conservative. He thinks that people have to cars and motorcycles, instead of horses.

October 1973
In October 1973 the female association 'Hippolyte' has fallen apart. From this year on everyone can become a member of R.S.R. Marcroix. Male or female, member of the R.S.C. or not, everyone is welcome!

16th of May 2000
During the 15th lustrum Albert Voorn gives a demonstration with his horse Lando. Just a few months later he will win a silver medal at the Olympics.

2019
The first Almanac has been created by the first Almanac committee. From now on it is tradition to create an Almanac every year. This also includes the festive Almanac drink! 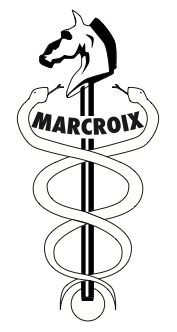